i am really surprised about the functionality of filerun. Already have nextcloud and seafile behind me. I was simply not happy with that in certain points

The only problem I have is that in a folder with a lot of photos (between 1GB and 15GB) I keep getting Server Error 504.

However, it is not always, only sometimes, but mostly ,-)

I really don't know what it is. I can open all other folders quickly and easily. Even the preview works relatively quickly.

I have to say that I call Filerun via the browser or via the phone with the SmartFileManager app. The error is roughly the same for both accesses.

The images were uploaded via the FileRun page. Not just moved into the user folder on the server.

At best, someone can help me who has or had the same problem. It would be really helpfull. I would really like to stay with Filerun. Maybe I have to do some CLI work, no problem. But at the moment I really don't know what to do...

If someone likes, I can set up a test user with a big folder.

One last question: is there an android app that is able to bring all functions of FileRun to the phone? The main criterion is the speed for the loading time of the preview of the images. Direct upload from the camera is secondary, which I can also do via ResilioSync.

Thank you all in advance.
Greg

Sorry, the screenshot is in german... 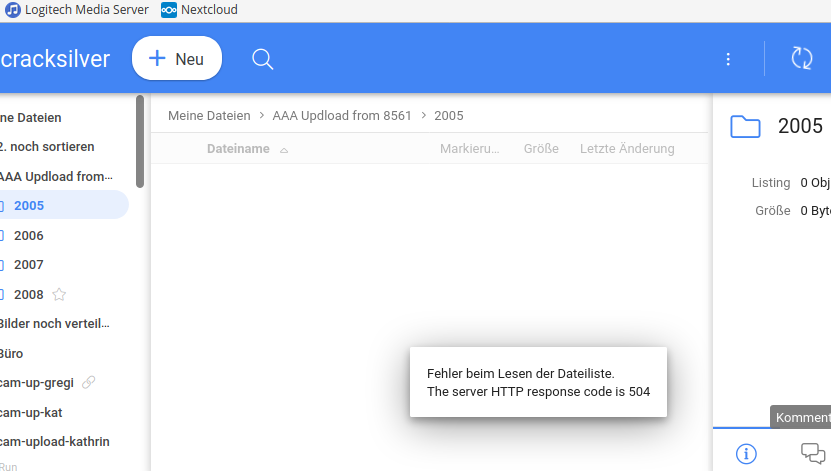 0
Under review
Vlad R 2 years ago

Hi and welcome to FileRun!

You just need to configure your proxy for a longer timeout period. The error is not from FileRun.

For Android, the mobile browser works pretty good as the FileRun UI adapts to the size :) You can still use the Nextcloud Android app with FileRun.

Thank you for the fast reply. So we can enclose the problem.

Do you know where and how to config the timeout period? This is a problem in nginx right?

The timeout in nginx is now longer than before. I do not get the error 504 anymore.

But still it takes such a long time to load a folder with 1GB and 314 pics. Are there any settings I could this make faster?

Thank you in advance.

The size of the files in the list shouldn't matter at all. 314 items is not particularly a large number. How long does it take to show the list?

That's bad. How does it work without the reverse proxy at all, accessing directly? Still minutes?

thanks for your reply.

I will do some tests tonight and come back to you.

If I try to reach the server directly over IP and port (not over NginxProxyManager) I get this message:

This software application is registered to a different server hostname.

I tried it directly (without NginxProxyManager), without SSL. Same game.... it needs 3-4 min mostly to open a folder. Sometimes it hangs up so I have to restart in a new tab.

So I use it in a docker on unraid. Used this manual: https://www.reddit.com/r/unRAID/comments/aplo48/filerun_docker_container_running_with_https/

I really like Filerun and would like to stay with. Whats the best option to use Filerun? I could install a VM with Ubuntu, Debian or something else. Would it be the better way?

Any ideas? Would be nice if you help me at this point. Thank you in advance.

Anonymous less than 1 minute ago

I have now installed Ubuntu Server with LAMP in a VM. Afterwards I installed everything according to the Ubuntu instructions of Filerun. Also IonCube, ImageMagick was installed.

At the beginning I had great hope because everything was installed so smoothly. Unfortunately it turned out that I have the same loading problems as with the other docker installation.

So, I really don't know anymore what the problem could be. Could it be some detail on the server that causes Filerun not to run properly? I don't know where to look anymore.

Does anybody have a tip for me?

I have to say that I have these problems only with pictures. "Normal" files are excluded.

I would very much like to use FileRun - but under these circumstances it is unfortunately not possible for me.

Is it possible that someone is looking at the server? Maybe someone will find the problem...

I would appreciate it if someone could help me.

If you are having these troubles with pictures, the only difference is that pictures have thumbnails. If you disable thumbnails, from the FileRun control panel, things would probably improve.
Your description of the problem was not accurate. You said it took 2-3 minutes to show the list of files. From your additional details I understand now that it probably took 2-3 minutes to show the thumbnails for all your files in the folder.
If that was the first time you opened that folder, it might be normal, depending on how slow your server is. Generating hundreds of thumbnails will take time and it's normal.
After the initial load, then listing a folder, with or without thumbnails, it should take less than a second.
Some servers are slow because of slow hardware and then no software will help that. In those cases, the only solution is to play with the FileRun thumbnail settings (which are many) and either have the thumbnails generated from the command line beforehand, or disable the generation of the thumbnails by having FileRun use the files directly for preview.