FileRun opens files in OnlyOffice with option auto-save off. With … 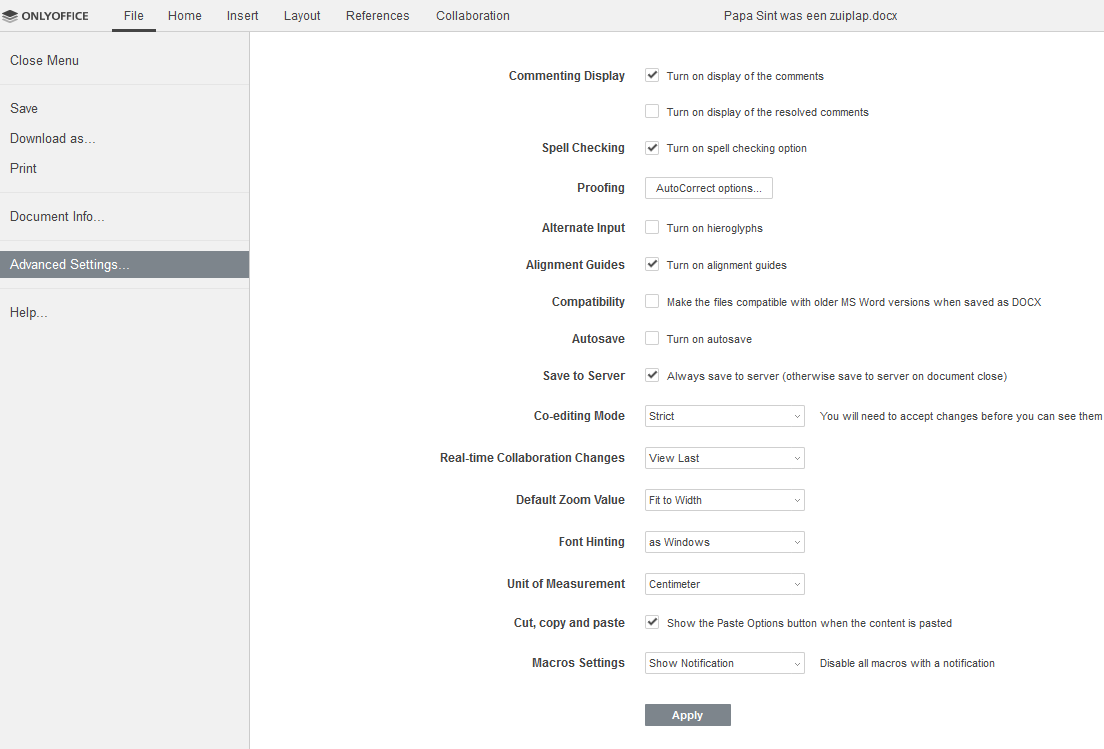 It is very unconvenient auto-save is not on.
OnlyOffice DocumentServer example does show auto-save to be on by default. So this is related to FileRun.

Can this please be investigated?

Unsure why but after reapplying permissions on the host, recreating the container and then updating FileRun (the update is essential), the issue is gone.

I didn't realize I was back on the old FileRun version. It is a bit strange the docker image is not up to date. You should be able to recreate the container without having to perform in-container update. I hope it can get updated soon. Updating via the UI does go fast and smooth.

@razvan I do that and experience this issue (can't move newly created folders within that shared volume to trash, files work fine): https://feedback.filerun.com/en/communities/1/topics/1153-failed-to-move-item-to-trash-folder

Do you have the same experience?

All folders, even the root folder of my disk mount point, are owned by the filerun user and all files and folders are 775. This is proven by the fact I can create, edit and permanently delete everything.

Just moving folders to trash does not work for new folders created with FileRun in the Family dir.

I do believe this is a bug.

It only happens with files/folders inside the folder (Family) that is directly mounted into the user (Jimmy) folder:

It seems files/folders within Family cannot be moved to the trash folder that resides within Jimmy.

Feel free to "close" or set to status to solved for this topic :)

makes sense, not ideal though..

if the user accesses via webdav, will the folder I shared with her be visible? Or is it only visible via the FileRun UI?

(I ditched the NextCloud app, it's useless. CX File Explorer is a better webdav file manager. FolderSync is the only good webdav sync app. NextCloud doesn't have a sync feature at all, it only has something that will sync files from server to some Android system folder (single direction, no sync) that other apps can't access normally. Makes it unusable. Also no way to sync the other direction: folders in Android userspace with the server. so no reason to use that app).

maybe I'm mistaken, during generation of the 2nd user it looked like it skipped all files in that mounted asterix folder because a thumb already existed :)

i testedNNextCloud last week and can't believe it's so popular. FileRun works so fast. Instant. And having a dedicated folder on the host machine for each user is much better. I like FR more and more!